Longing and Hope in "A Plum Tree in Leatherstocking Country." 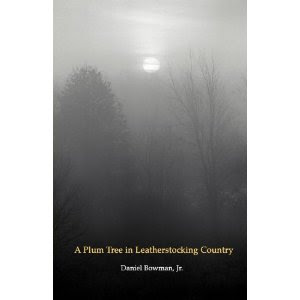 Today, I have the privilege of bringing to your attention a small book of exquisite poetry by Daniel Bowman Jr, a graduate of my alma mater, Roberts Wesleyan College.  Dan is currently a professor of English at in , where he lives with his beautiful wife (whose own writing talent ought to be mentioned) and two children.  I also happen to know that Dan has a lovely singing voice.

I am not a poetry critic nor do I pretend to be.  I do not often sit down with a book of poetry and just read; I read fiction for the story- I turn to poetry when I want to revel in the beauty of language.  Nonetheless, here are my humble and completely unbiased thoughts on “A Plum Tree in .”

Dan’s poetry is accessible in its simplicity yet full of mystery, depth, and a feeling of longing.  The poems have an especially strong sense of place, whether they transport the reader to or the pastoral countryside, or gritty realities of big city life.

This place is a longing,
Downtown its lonely form,
The great lake my only body.

The Yankees lost but it’s only July and we’re thirsty, we flee the Bronx, switch trains at midtown, take the Q all the way to Sheepshead Bay, wander into the bar closest to the stop which seems to be some kind of cosmic tennis club for models who speak only Russian.

And the Mohawk region of :

Ashes bring hard faith:
In my vision, only the late nigrescence
The symphony at Stanqix,
And always the open field.

November straddles plum-black fields.
November waits for me,
Its shadows like dreams in the dry stubble.

English majors at were fortunate to take classes from two fantastic professors: Judd Decker and Dr. Harold Hurley.  Whether you liked Hemingway or not, you could not help but become excited by Dr. Hurley’s love of Papa’s sparse language and baseball imagery. Jud Decker, whose voice was sleepy yet droll, was in love with two Tess’s- Tess Gallagher, noted poet and fiction writer, and of course, Tess of the D’urbervilles, Hardy’s most tragic literary figure.  Professor Decker opened his students’ eyes to beauty of language:  from Emily Bronte’s depictions of foggy English moors in to Anne Tyler’s quirky characters and haunting prose in “Dinner at the Homesick Restaurant.”  Every single class, Professor Decker was drunk on words, and those of us just beginning to understand that books would become an important facet of our own histories felt privileged to view literature through his lovesick eyes.

I see and Anne Tyler and Thomas Hardy in Dan’s poetry.  I see Tennyson and Frederick Buechner and Emily Dickinson.  Thumbing through a copy of Buechner’s “A Room Called Remember,” a collection of essays assigned in Professor Decker’s “Contemporary Lit” class, I noticed I’d underlined one sentence in the entire book.  Just one!  I don’t know why.  Anyway, it reads: These are the moments that in the depths of whatever our dimness and sadness and lostness are, give us an echo of a wild and bidding voice that calls us from deeper still.

These words capture the essence of Dan’s poems:  while there’s an underlying feeling of longing, sadness, and fogginess, beyond the dreamlike nature of each verse hope resounds.

If you’ve never been into poetry, this slim volume of wonder is an excellent place to start.

On the Irondequoit Creek
And in July they march down
Columbia Street
And end with smoke.
In August they become

Poison Ivy creeping
Along the trail where I walk
With my daughter.
Soon they’ll be hidden
Under dead leaves and snow.

The thaw will have its say
Again next year
And I’ll reach for the shovel,
Happy for moonlight
And a grasshopper’s song.
Posted by Holly at 3:18 PM

Email ThisBlogThis!Share to TwitterShare to FacebookShare to Pinterest
Labels: Books and Literature

This made me smile for so many reasons.

It begs to be noted, my dear friend, that you too are a poet. And I quote:

Every single class
Professor Decker
was drunk on words
and those of us
just beginning to understand
that books would become
an important facet
of our own histories
felt privileged
to view literature
through his
lovesick eyes.